The food on my plate, in Iran, was a play of myriad colours and textures where sweet and sour both are appreciated equally. Flower petals were used extensively in cooking and fruit pulps are mixed in meat curries. Tea is better than water and smoking for everyone is allowed. So if one wants to look beyond the kebabs and the koftas then they wont be disappointed while sitting down to eat in Iran.

Chai, as they locally call it, came to Iran from India as recent as the 1900s and now Persian tea is grown along the Caspian sea lined hills. It’s an orange to dark red concoction made of just tea leaves soaked in a big pot of warm water kept in one corner of the room. Just pour yourself a glass and add water if you want a milder version but never mix sugar in it. 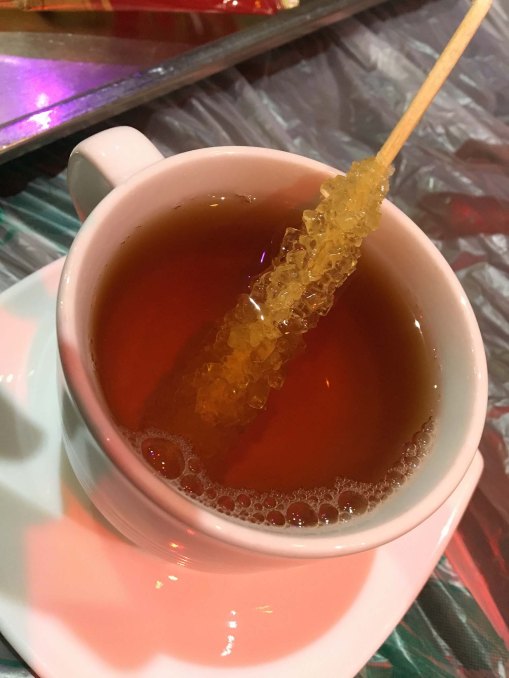 Shaakad strips or chunks of it are served by the side 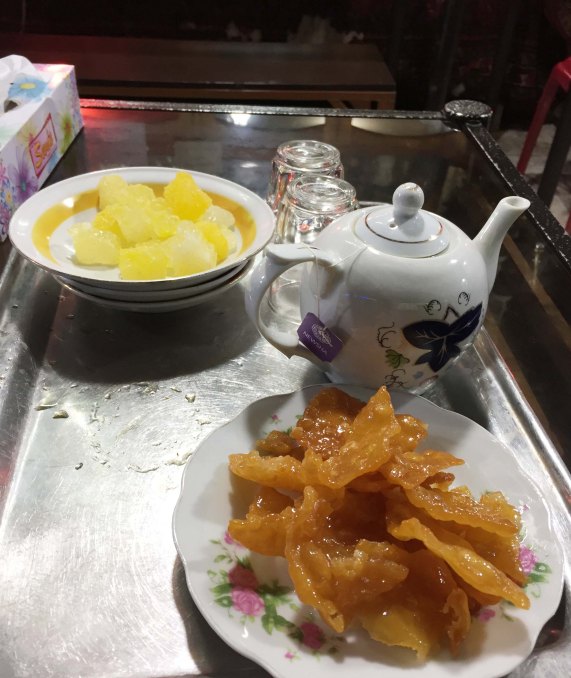 Though the new age eateries do provide sugar cubes now but the traditional sweetener is ‘Shaakad’ or raw chunks of sugar. Shaakad is sometimes stuck in a stick and dipped in the cup slowly melting away into the chai. In rural houses you may get it as sugar chunks so quickly pop one into your mouth and then you slowly keep sipping into the tea and the sugar melts in your mouth. Most restaurants give unlimited refills of chai both before and after the meal. Tea is offered at the drop of a hat, even if stop by the road to ask directions or just say hi to your guide’s friend, they will invite you in and immediately serve tea. Surprisingly, most traditional restaurants and hookah places in Iran are called ‘teahouse’.

Sitting down to eat is the right way to describe the Iranian way of having a meal. At any traditional restaurant one can find the big square cushioned lined beds where they place a plastic sheet in the middle and serve the food on it. The main bread which is generally ‘nun’ or ‘lavash’ is served in packets in the middle and is shared by everyone on the table. After your meal the plates along with the sheet will be scooped up perfectly without leaving any trace of food. Hookah for ladies is allowed hence very popular amongst younger crowds. 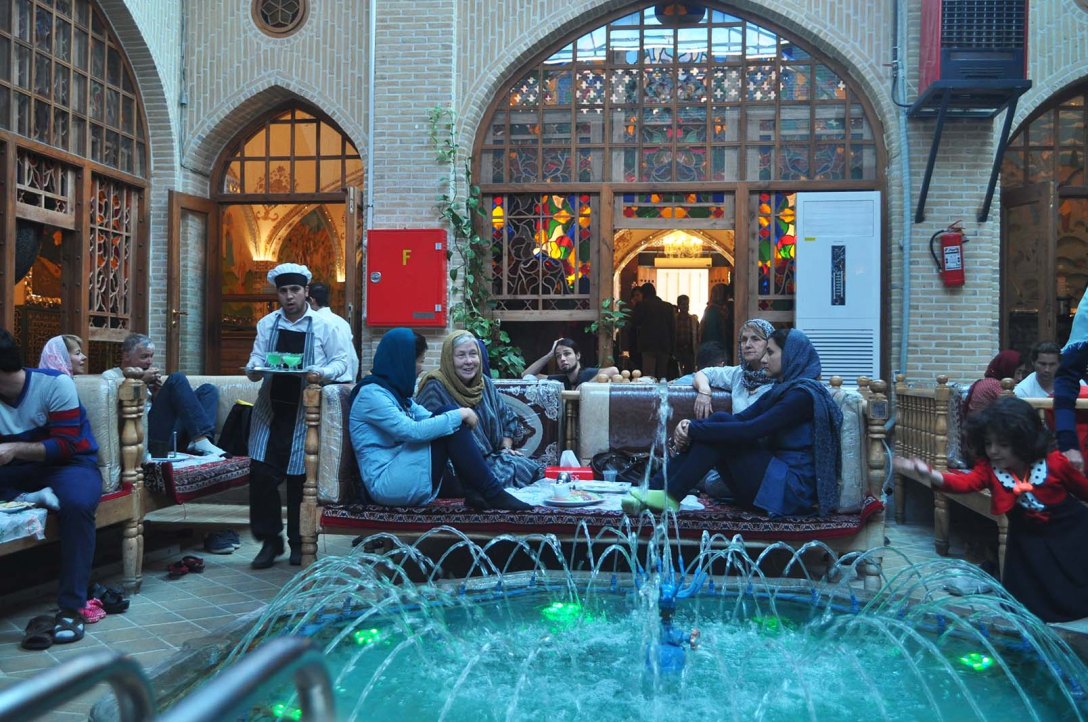 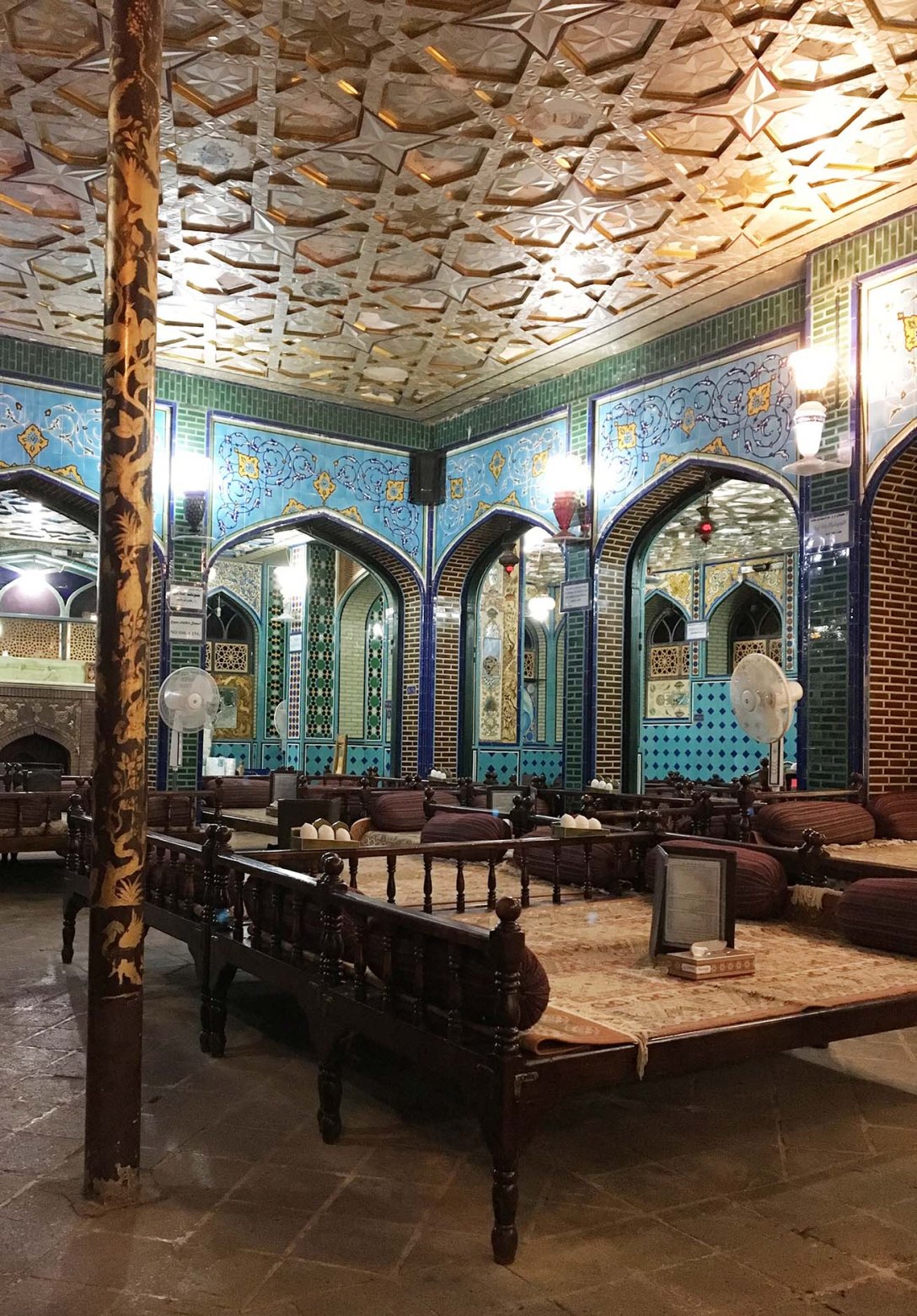 The staple bread is ‘nun’ which is a big flat bread and its only baked in bakeries… families pick up bulk loads and store it for long periods. ‘Lavash’ or a paper thin bread is sold in small packets and served with every meal. During the early morning hours one can find various dates and almond stuffed sweet breads sold along the street bakeries, meant for breakfast. Its very hard to pass by just smelling the aroma and not picking up one.

The most colourful meal of the day is the breakfast. Fresh cut cucumber, tomatoes, white cheese, apricot jam, honey, sweet sesame paste, dates stuffed bread and warm yellow eggs.  Another traditional breakfast which is very famous is bread and omlette and a stew made of local beans. Though one can get alarmed by the oil floating on the stew (details coming up in another post) but one sip of this thick creamy soup and you cant stop till you finish the bowl. Then comes some chai and crispies. 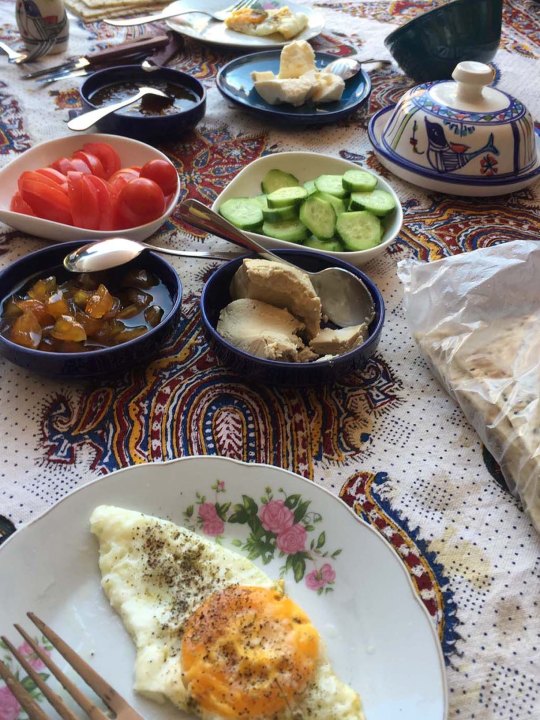 Breakfast served at most places have the basic of an egg and cheese coupled with fruits or jellied figs and a warm white and sweet sesame paste too. 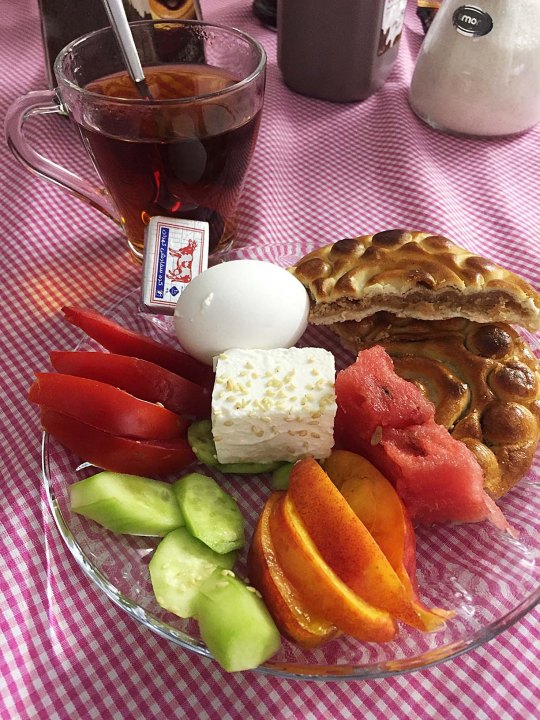 Cheese in different forms and firmness is served in breakfast

In Isfahaan, this massive size eatery sells only one thing and it’s the Beryaani. Unlike the rice biryani that the rest of the world know this is a big thin flatbread placed half-fold on a plate and two kinds of minced meat placed within the fold. On the sides a plateful of basil and thinly sliced white onions and lemon slices are served. You have break a small piece of the bread and put some of the minced meat and a few leaves before stuffing it into your mouth. The basil has a mild acidic sting that cuts into the oil of the beryaani and balances the palatte…. truly delicious! 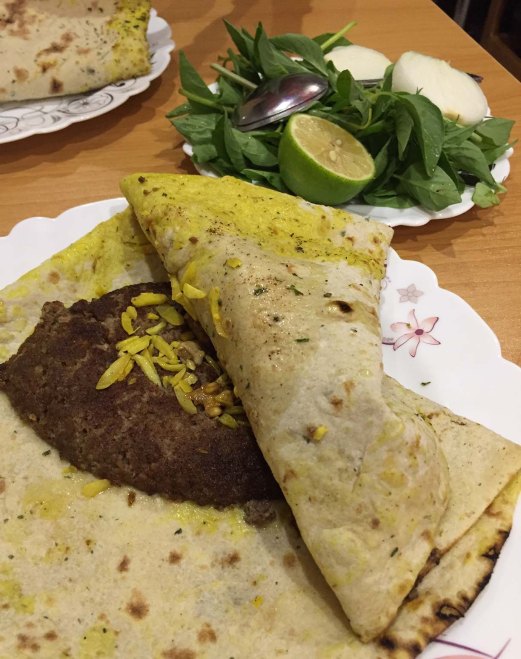 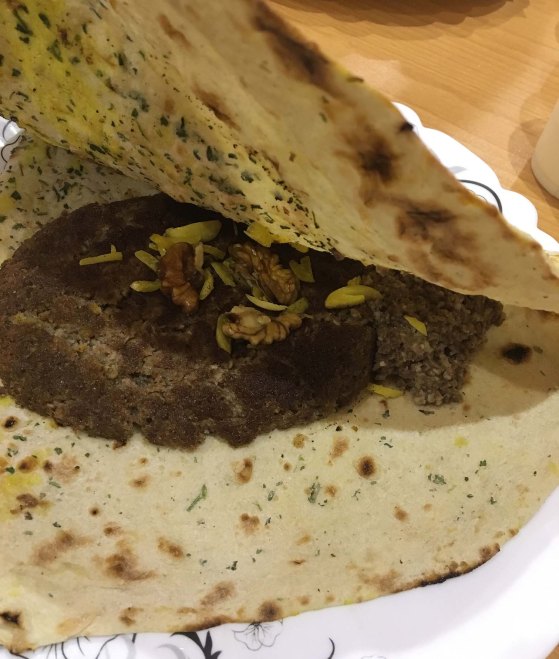 Faloodeh is an iced drink made of different flavoured sorbets and crispy noddles on top. The drink coats the noodles but the noodles doesn’t loose its crunch till the end. And even pomegranate juice and sorbet and ice cream is a must try in here. It’s a bit sour so pair it with a sweet ice cream. Ice sorbets are a rage all over the nation. The sorbets are all fresh fruit flavoured and hence highly recommended. 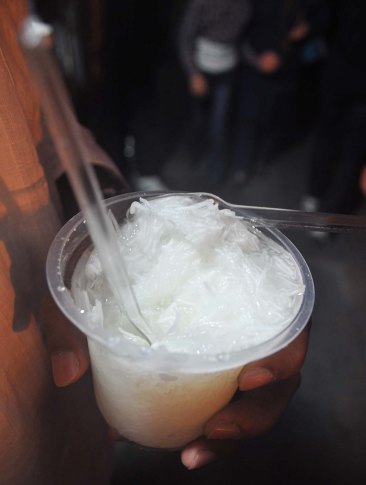 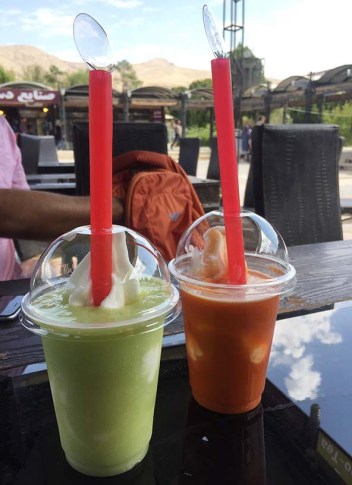 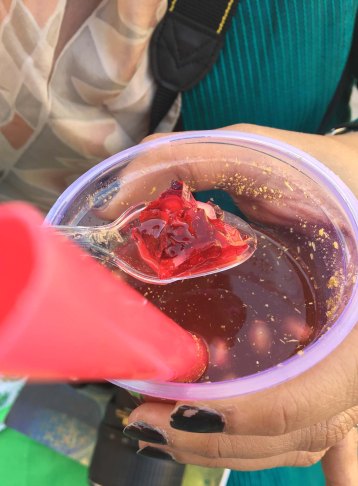 One dish about Iran that has travelled far and wide is this poor man’s soup called dizi. Its basically meat along with its fat slow cooked with chick peas into a soupy mix in a clay pot. When its served in a pot, one has to pour it out on a bowl and mash it properly to mix the meat, fat and chickpeas and then have this gooey soup with some  ‘nun’  bread along with some pickled vegetables. 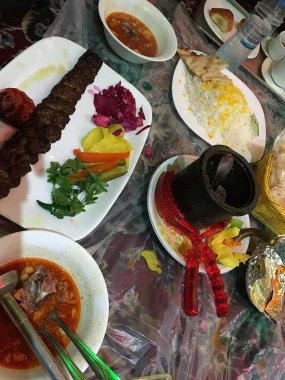 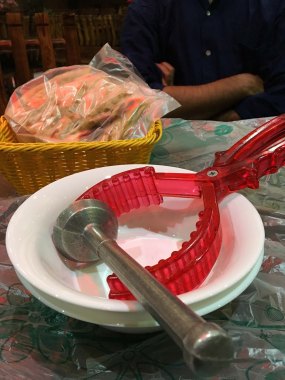 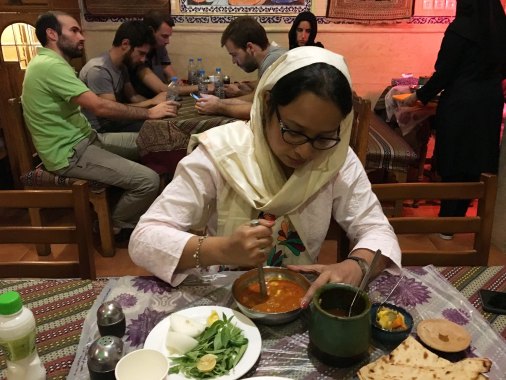 Spices are available by the loads like many of other middle-asian markets but what caught my eye was the array of dried flowers used here. Dried rose petals of different colours line store fronts. Also their saffron is one of the best in the world. Have heard that it was the most costliest until the UN embargo happened and trade stopped. There are 30 brands of Saffron in the market and all are equally good. Candied fruits like grapes, dates, apricots and others are a big draw and most of the fruits are pulped and made into paper thin sheets and sold in the market. 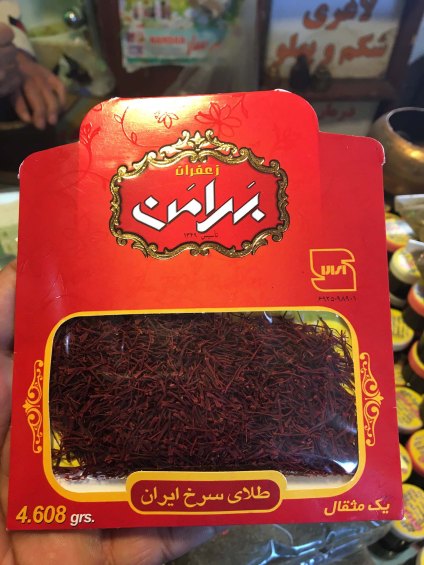 One of the many saffron brands 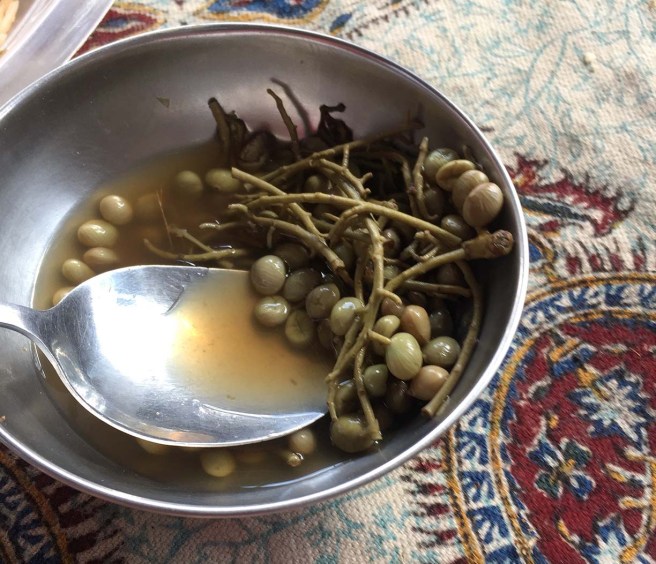 Lets talk about the meats now

Last but not the least is the meats we tried… kebabs are rolled out of every nook and corner of this country in so many shapes and sizes that that one stops to remember that last one and starts enjoying the second one. Mostly lamb or goat meat is served because the cow is precious for its milk but they do eat beef in some specific preparations. Every cut of meat is meant for a different kebab style. Even chicken meat is used very precariously for certain kebabs. 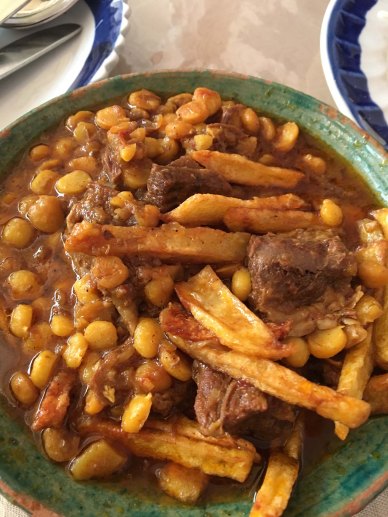 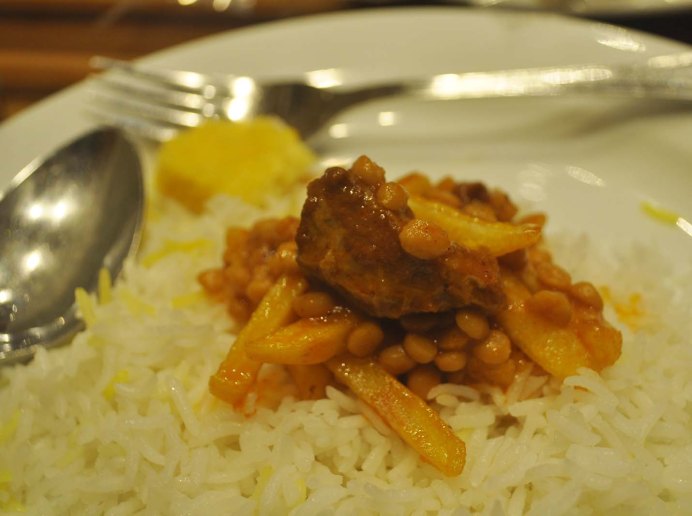 It’s served with fries on top

Persian cuisine has no liking for green chilli. Indian ground black or white pepper is the version of chilli we found but instead we discovered many flowers and leaves and seeds on our plate that continuously surprised our taste buds. Its a cuisine that is as colourful and fascinating as those Persian tiles you see on the walls of many historical buildings around the country.